With the Spain trip coming up at the weekend, I had a Sunday session on the Eden for salmon with my mate Jon and an after work session for carp  due to the tides being around midnight Cumbrian mullet will be safe until my return from Spain, hopefully Spanish mullet will not have the same luck! The Sunday salmon session was under threat at the back-end of the week due to the much forecasted “end of the world” storms headed our way, these proved highly pessimistic and a call to Mark up on the Eden, came back with a all clear with the river putting on 3 inches over night and looking spot on. In brief the river looked fantastic and I hooked and lost a fish within 5 mins of getting into the first pool, I can’t really say I would have done anything differently if I had a second chance it was just one of those hook pulls that happen – bummer though. Black Cascade was the fly that nearly did the damage. We didn’t see another fish all day but Jon and I don’t fish together nearly enough (in our bait soaking days, Jon was in Warrington and I was in Preston and the Ribble was our usual haunt, me moving to Cumbria and Jon to Wales has increased the distance a bit,  but there’s some fantastic fishing on both  our doorsteps and we really should make more of an effort) so it was a good day with great company in a fantastic spot. 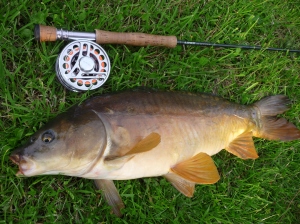 So Wednesday brought a return to Atkinsons on trail of Tangerine Dream, this great looking fish put in another appearance but only fleetingly and didn’t seem to want to get involved in the mopping up of biscuits that it’s mates were clearly in the mood for! 2 low doubles and a couple of scamps made up for a very entertaining evening though. Deer hair mixer “fly” was in use.

I spent last night sorting 2 travel rods, reels, 5 boxes of flies and all the usual bits to be inserted somewhere in my bag for our holiday. Targets are mullet off the beach and in the river at Fuengirola, barbel in the rivers Grande and Guadalhorce and large mouth bass and carp in the Ardales embalses ….. is a glam slam of the four in one day, too much to ask? Seeing as I’ve yet to get a barbel on the fly – probably ……but I’m going for it.