It seems like an eternity ago now but my Spanish holiday threw up some interesting fishing and I got to meet up with Paul Hogan whose blog fishydreams.com is an excellent account of freshwater fly fishing in Andalucía. My social calendar and Paul’s work schedule meant that we could only meet up on my penultimate fishing day over there but we had a good morning together on the Rio Guadalhorce and Paul put me onto a couple of stretches of river that I’d never have found with radar. The old maxim about local knowledge is a true one. 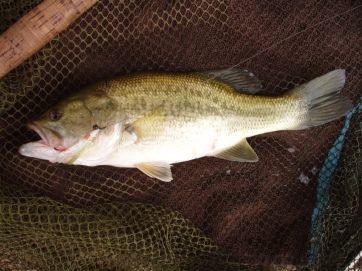 Prior to meeting up with Paul I’d had a couple of days up at the reservoirs at Ardales, this trip was the first time I’ve been in June, as I usually go in September unfortunately the Spanish schools were already on holiday and the reservoirs were very busy with bathers and canoes etc… I managed a few small bass on poppers and streamers but missed a great one which inhaled my popper only to me to fluff the strike. I also had plenty of carp on beetles and bread flies. I’ve always been promising myself a late session through to dark on there, as all the talk in the States about bassing on poppers is about late evening into night… next year perhaps. 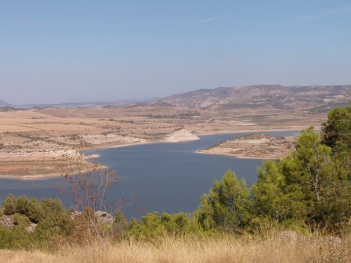 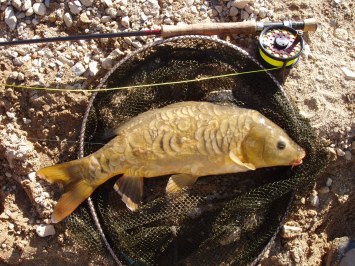 Gualdalhorce reservoir above left & right one of the few mirrors, most carp were commons.

I also had a couple of sessions on the river prior to meeting up with Paul and had a few small Gypsy barbel on the nymph up to a pound.

The morning with Paul was an eye opener – our first beat was at *******, I’m promised to secrecy on the locations…. It was a fantastic looking bit of water but we found a significant foam on the water and  couldn’t see fish through it and as sight fishing is Paul’s forte we moved on, but not before a made a mental note of how to get back!. Off in convoy to the other piece of water upstream and I’ve now found my new little bit of heaven in Andalucía – the river is skinnier up here and you have to have the skill set of a 90 year old apache warrior  to creep in on these barbel, as they seem to spend their whole day in a constant state of paranoia – but we managed to creep in on a couple of nice ones and ended the morning with a fish each on nymphs, mine to my favourite Evil Weevil pattern and Paul’s to his infamous red nymph. A cold drink and tapas rounded off the session and I’m planning to get back next year to take Paul up on his offer of float tubing for bass on another reservoir. 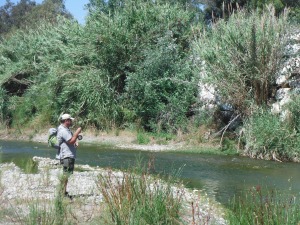 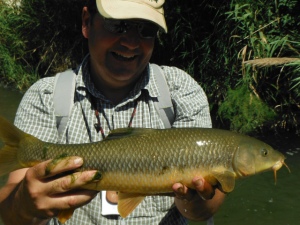 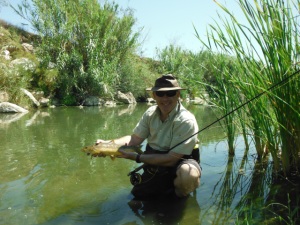 The next day (and my last this year) I headed back downstream to the beat we abandoned and the foam had run off, I succeeded in my final Gypsy barbel mission in getting them off the top, this was less selective in terms of size but great fun and a real novelty. A tan klinkhamer and yellow humpy proved they will just about take anything!

I finished stalking a couple of big and wound in after losing one of them which smashed my 6lb tippet. A couple of scrumped oranges on the way back to the car were  a real treat (brought one back for Dad) and I’m looking forward to a return next year – Adios Espana.

I never did get out after the mullet, another one for next year