I’ve been rather amiss with my blog posting and my fishing this winter, it seems that work, family, friends etc. have limited my time on the water and any blog reports forthcoming from such.
I have been fly tying, in fact in a effort to improve my feeble offerings I joined Lakeland Fly Dressers and ended up with the job of Treasurer! I’m hoping to get round to sorting out some macro photography and blogging on some flies in the future.
However as a re-boot of blogging – My friend Paul Hogan’s recent post about Dancing with Gypsies on his excellent Fishydreams.com blog reminded me of a not so pleasant experience in Eygpt.
In 2006 a group of us went to Lake Nasser in pursuit of Nile perch and tigerfish which in itself was a mistake due to the fact that the lake has been hammered by local commercial fishing, everyday it seemed we came across baited long lines and nets everywhere and while it’s not my place to decry anyone in Africa making a living anyway they can it seems that the lake is current in a spiral of decline.

My brothers Stuart and Paul have both had Nile perch in the early 2000’s going up to 100lbs but our trip produced fish to 20lbs and this seems the norm these days with the odd biggie coming out, but nothing like the mega hauls of yore.

Tigerfish and Nile Perch – these were the standard size for the trip – I was particularly adept at catching the small ones.

The six of us were assigned two to a boat and boatman, Jon and I went together. These boats would provide our fishing platform and sleeping quarters for the trip, the 3 boats meeting up in the evening to share a meal on the “mothership”.

On the 4th evening of a 7 day trip, the six of us were sitting down to dinner when Jon excused himself as he wasn’t feeling too good, a hour or two later I repeated this and threw up 3 or 4 times before getting back to the boat. On arrival Jon was in a similar state. As the night passed the process of our bodies voiding their systems of whatever was ailing us, moved from an upwards trajectory to a downwards one. The throwing up stage was easily preformed from the boat in a leaning over the side fashion, the next stage was not so straight forward and while Jon went desert right, I wandered desert left for at least 6 trips of the most violent nature, it’s ever been my displeasure to experience. This was all in virtual darkness and with only a head torch to find my way. On my last trip of the very long night, I was crouched in the desert wanting to die, head hung wondering what I’d done in a past life to warrant such dis-comfort, when I heard a padding noise about 20 yards away up a slope into the desert. Raising my weary head my headlight picked out the reflection of 6 or 7 pairs of eyes belonging to the jackals that haunt the lakeside. They seemed to consider me with more interest than I could summon towards them and after I finished what I was attending to, I left them to their nocturnal activity and traipsed back to the boat and fell back into bed. 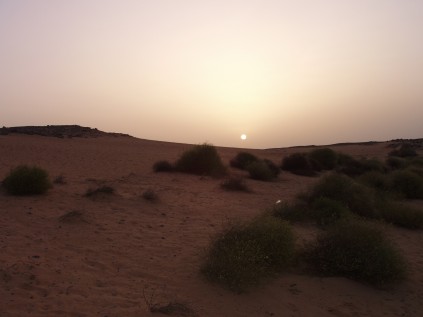 I re-counted this event to the team while they had breakfast and Jon and I had water and re-hydration salts, Dave P cheerfully announced that at least I now had my Red Indian name, explaining while Kevin Costner was “Dances with Wolves”, my new moniker would be “Shits with Jackals”
We were puzzled that while the rest of the group experienced some D&V, none did to the violent extreme Jon & I did – what happened? On our last day at lunchtime we found our boatman crouched over a huge dead decaying croc – when asked what he was up to he answered when he found them he always took their heads off in order to get the claws and teeth, which were made into tacky gifts for the tourist trade!. On getting back to the boat he went straight into the cooler, without washing his hands and took out a bottle of the “shared” water we’d bought and drank heartily, at which point 2 pennies dropped and rolled on the deck. 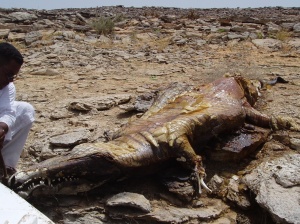 One thought on “My Red Indian name”