Launch of the ducks

Paul Hogan who pens the excellent blog Fishydreams over in Spain, tells me that the Spanish call a float tube “pato”, which is Spanish for duck.

Last night saw Craig D and myself launch our “ducks” on a small water in the Lakes which, being sheltered by woods covering 3 banks, we decided would be an ideal testing ground for 2 numpties with all the gear ………

I guess it’s fair to report that the trip was a success, albeit with a few lessons learnt.

After a tentative launch Craig was off and paddling for the horizon , while I was buggering about with my fins. Paul H had told me that a pair of proper diving fins was the way to go, as the ones that come with most tubes were usually poor. Guess what? Paul was spot on – they were shite, with two of the 3 buckles slipping off on a regular basis. A paddle over to Craig who granny knotted the straps, saw me back in action, although a trip to the diving centre is certainly on the cards…. “Paul what can I say? – they came with the tube, pump, straps, fins ….. the whole enchilada, nothing ventured and all that” 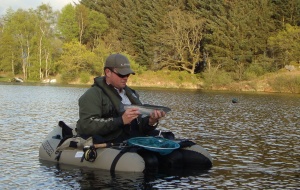 Craig in action and with his first “floated” fish.

Craig was soon into a fish but the gentle breeze dropped away and although there a few fish rising to chromomids, but it was patchy and while switching through buzzer patterns and trying a few emergers, I forgot about my fins and started to enjoy myself. I decided though that slinging 3 boxes of flies, along with my usual mess of tippet spools into one of the tube’s pockets, wasn’t the way to go and I’ll soon be tying up a tube box of flies and paring down the tippets to a couple of spools. 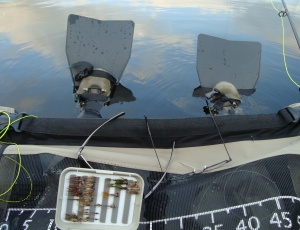 Craig made his way to the dam bank and near a bunch of sticks up, started to catch and lose a few, while drifting about in the middle trying to find a bit of ripple was proving fruitless for me. I’m not above a bit of swim poaching and watching Craig into another fish in the fading light, I made my way to the other side of the stick ups, determined to avoid the blank.

It appears that Craig had discovered a hot spot and I soon had 3 fish come to the tube, but in another lesson for the night, I discovered that my plan of just “scooting” a fish onto the tube’s apron was bollocks and I really needed the short landing net, which was back in the truck. We fished till the light gave out and it was virtually pitch black as we packed away and slung the tubes on our backs to make our way back to the truck. 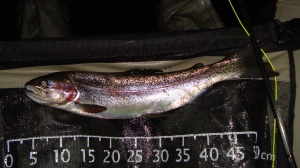 What can I say? Not the greatest photo in the world, but hey it was dark and wanted to get him back quickly.

At the truck we had our final lesson in that dry sacks aren’t always what they’re cracked up to be … there’s no photos of me in this post, due to Craig recovering a soggy iphone from his “dry” sack so he was off to try the rice trick for recovering wet phones. With five fish to Craig and a few lost and three to me, we both agreed that it was a great start to life as a duck.

One thought on “Launch of the ducks”