“This is not a fishing holiday, Richard and Sue won’t want to watch you looking at water all day ” was the comment from Diane as I pushed a rod, reel and fly box into my holdall for our holiday to Galicia and Asturias. I replied that I understood this but our schedule meant that I would have a four hour window on Saturday morning to fish for mullet in the Rio Nerivon in Bilbao, which since seeing last year, I’ve longed to have a crack at. 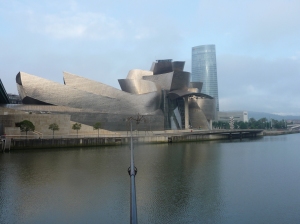 The Rio Nervion with the Guggenheim Museum

Last year’s deal was because we were travelling onto Andalucía, and fishing in the second week, I would forgo fishing during the first week. I’m getting my Andalucía fix in September this year, so I argued that a week was a long time to go without wetting a line.

Our holiday schedule was .. fly to Bilbao, drive out to Galicia, 2 nights in Santiago Compostella, 1 night each on the coast and across in Leon before a trip through the amazing Picos de Europa, to end off with 2 nights in Bilbao. Clearly with such a journey we would come across water and desirable fishing spots, but I was happy with a trip to see the Rio Sella which was a Salmon fishing haunt of Franco and my Bilbao 4 hour allocation. 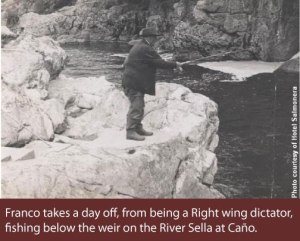 It’s fair to say, I was blown away by the enchanting north west  corner of Spain. The first jaw dropping water was the Rio Porma north east of Leon. This is reputably great trout water and certainly looks the part. Being what the Americans call a tailwater, fed by the Porma Embalse dam, it’s cold water flowing from and over limestone, in my book that equals great trout. To appease the group I didn’t demand a proper stop so the photo of the river is nicked from the internet but embalse photo is mine. 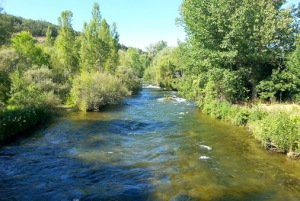 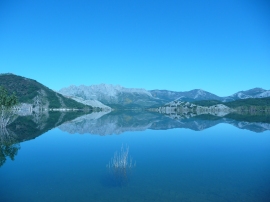 The Porma Embalse, dam on the left

We stopped in Cangas De Onis which the Rio Sella flows through and is a couple of miles from Franco’s fishing spot at Cano, the group were keen to see his old stomping ground and within mintues of standing on the bridge looking upstream to his spot at the weir, a salmon which I put  at 15lbs passed below us on it’s way upstream. We paid a visit to the weir and then travelled onto the Picos de Europa, which I have to say are mind blowing. All the lakes up here seemed to have no fishing notices posted somewhere but I sure with some research, I could find some water and a return to the Sella and Porma are now a “must do”. 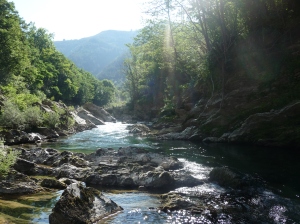 The Rio Sella – looking up to the weir. 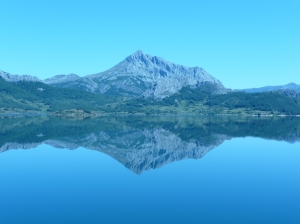 My Saturday morning misson to the Nerivon, began at seven with a thick head due to over indulgence! It was two when we went to bed after a night of fino, rioja and brandy and the alarm was very nearly switched off and ignored. I crept through the hotel lobby, across the road and looked at the river. It was high tide so I couldn’t find any fish on the shallows because there wasn’t any shallows! I had to concentrate on fish making their way round the walls and quay steps.

Fishing a red bead headed diawl bach I lost a good fish after a 10 minute scrap and was resigning myself to being beaten by the Nervion mullet, when I decided that there was no way I was going home on a blank after plotting for 12 months to fish here in the shadow of the Guggenheim. It’s was time to get dirty and on went the SJT bread fly which is basically white EP body fur wound onto a ESP raptor. This fished slowly on the drop accounted for one missed take after another until one that even a still drunk bungler like me couldn’t miss, I quickly took a picture with the Guggenheim in the background and packed up and went in search of a couple of café solos and a tomate tostado. 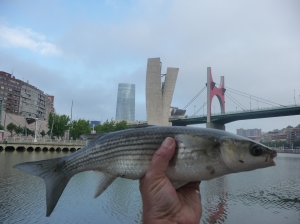 With the mullet of Bilbao on the done list, my mind keeps returning to the trout of Asturias and Leon…

One thought on “Galicia and Asturias”